Completely Random Thoughts 29: This Is Not Sparta!

Anyway, I just wanted to say thank you to my readers for sticking around. Certainly my time is almost done, but I wanted to create, above all other things, a good reference aid for Reggae and I think I’ve done that as well as I can. Surely I could just list out tracklists, which several of you have suggested I do, but I don’t feel like it and when I don’t do that, it promotes cross referencing, so you’ll have to go somewhere else to find that (even though when I do a review, these days, I mention every track on the album and it’s been that way for at least a year) and in the process of you doing that - You’re likely to find something else you like as well. And - Oh yeah, that’s a lot of work! I write reviews checking in well over 2500 words and modern classics are well over 3000 generally. So big me up too. I know I don’t spell check very well and I don’t pay a great deal of attention sometimes and I go off on tangents about absolutely nothing, but I work HARD and hopefully whatever number we end up at, it helps people in the future to reference the greatest music, in the greatest era in the history of the world. And to show you just how appreciative I am, here’s a picture of Lenora Crichlow! 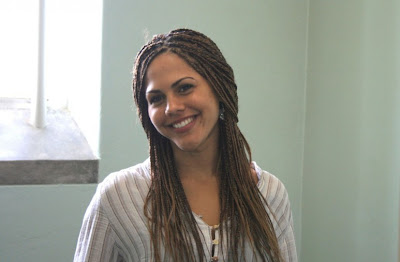 {Note: You know someone is REALLY beautiful when you find them so despite the fact that their look is almost nothing like your type. She is neither extremely dark chocolate, nor terribly curvy, but Lenora Crichlow is absolutely GORGEOUS}
ALSO! In my own most humble opinion, our greatest quality is our versatility. If all goes according to plan, the next review I write will be for an album from Danny I (the second one I’ve written for him) and if you just go down my list and see the vast variety of names we’ve dealt with, I think it’s madness! Is one place that will give you a review for Etana’s latest release AND Machel Montano AND Patrice Roberts’. AND Admiral T. AND Black Dillinger. AND Blenda! AND Stevy Mahy (what!). The biggest Reggae albums, AND the biggest Soca albums AND, occasionally, the biggest Zouk albums also. And just truly a wide variety, so big up everybody for reading and I don’t know how many more I’m going to give you, but we’ve had a great time doing it.

Tomorrow we’ll have more fun, because I’m FINALLY giving you Big Tunes #50 with a hitch. Tuesday is Danny I . . . Oh and on Monday! I’ll give you another reason to love me (especially if you enjoy movies).
Here’s a song!

BALANCE & Absolutely No Behaviour! None!
RasAchis
Posted by Achis at 12:18 AM