If you haven't been able to figure out up to this point (clearly, thinking isn't a strength of yours) I love this stuff. For me, music is one of the greatest and most easily appreciable spices of life that there is and I couldn't (well, I could, but I don't want to) even begin to tell you just how much it has improved my life, personally. It also can be a very emotional experience for me. As I've said in the past, I'm not actually the most well put together person you'll ever meet, so the absolute perfect song, at the absolute perfect moment can definitely affect my senses in a billion different ways and I'm not complaining at all. Examples? I say it with not the slightest bit of shame (at all!) (no behaviour!), that I ROUTINELY 'tear up' listening to music. Generally in life I don't cry much and usually only when on the verge of some spell of delirium or when I'm, otherwise, really really happy and in the musical sense, it's pretty much the same. Music that makes me happy also 'threatens' to reduce me to a living and breathing bottle of water. Here, I present for your . . . whatever you want to do with it - Ten songs which do just that. TEARS!
{Note: The only rules for this list are that no artist is used more than once and that it's all Reggae. However, I cut out so much Soca that I may make a Vol. 2 at some point}
{Note 2: Tunes appear on no order after the first}
{Note 3: Biggup Bredz if you haven't already}

Launch. I thought that we'd start with THE tune which actually hatched this idea. I have no idea why the biggest early career hit from the amazing Natural Black isn't this amazing tune, 'Free Again', but is (probably) 'Bad Mind'. Surely the latter wasn't a bad tune, it is BIG actually, but for me - looking back, the greatest thing he ever did prior to 'Far From Reality' was probably this tune. For me the song was quintessential Natural Black which means that he is able to infuse a great deal of personality in a song which, on the surface, seems SO straight forward. The result is an inspirational vibes of a MASSIVE order which flattens the listener at the chorus. It should also be said that the riddim here, the Fresh Air, should probably be considered the greatest ever musical contribution from its creator, Goofy (the same riddim backs Warrior King's huge 'Breath of Fresh Air', which would have made this list, easily, had it stretched to 15 or 20).

'No Night In Zion' by Luciano

No night. EVER! Legendary singer, Luciano, hardly says an actual word before I need to wipe my face on what is EASILY one of the greatest songs of all time, 'No Night In Zion'. The intro on this song is probably one of the most memorable ever and by the time singing begins, you're already in the midst of this rapturous PRAISING 'confusion' that the balance of the song comes through as this most SPECTACULAR echo!

Problems! Much like the final name to appear on this list (and the previous one, for that matter); Jah Cure is someone who I could've filled this post with the material of. Armed with a downright HALTING voice, the Cure has a catalog full of meaningful tunes which are going to carry a different type of 'weight' than any of his peers, simply by his amazing delivery. While I could've chosen far more likely choices here such as 'My Life' from the same album and, of course, True Reflection' and 'Longing For' (and 'Love Is' got very close to being on this list), I went with 'Soon Come' because I think it has become one of the most underrated tunes that he's had. Also - It is HUGE! From beginning to end, it is a powerful emotional trip through the mind and one which should not be forgotten. "Tell Mama be cool, tell Papa be cool!"

Shine on. Almost surely the newest entrant on this list is a tune which comes from FLAMING Achis Reggae and earth favourite, German Reggae Princess Sara Lugo, 'Old Roots Rastaman'. This tune is interesting for a variety of reasons, not the least of which is the fact that it actually missed her wonderful debut album, "What About Love", where it would have been a highlight and that it utilizes the same Lion Paw Riddim which is best known as the crystal composition which backs Richie Spice's hit, 'More Terrible [9-11]'. Still, the most interesting aspect of the tune, for me, is the fact that I've yet to hear it in its entirety or partiality (a word???) without smiling from ear to ear. There're just certain spots in this tune which were seemingly designed to just kind of shock the listener at a certain moment with such a great vibes that it shows on your face and clearly Lugo agrees (and DO so check the second verse):
"He doesn't have much
But that's okay
He doesn't need a lot, to be free
As long as he's got music, he is fine
Look at his wonderful smile"

SWEETNESS! If you really love Reggae music you love this song. That probably goes without even saying (even though I just said it). Specifically, the thing about my affection for 'Trodding Home', which likely remains the most recognizable single track in all of Ras Attitude's career, is the 'mood' of the tune. It is a repatriation tune, but it's one which gives you the same sense of comfort and FULLNESS that the lyrics of the tune offer and that's something which, unfortunately, is quite rare. If we are to hold up this place "home" as this very desirable and perfect place, then we sing of it, we should be happy! The prospects of going are something which should make you happy and you can tell that Attitude crafted, wrote and sang this one with giant smile on his face. You'll smile when you hear it also.

Lyrics! Intelligence can be such a powerful quality. Capleton, in my opinion, due to his rather LARGE and GRIMY presentation has often been ignore for being the proper A+ level lyricist that he is and not only that, but when at his best, his songs can make such good SENSE (and we flame all common sense around here, but we'll make an exception here). In the case of 'Can't Sleep Ah Night', that was definitely evident and the tune was wrapped up and delivered in this very big package - the sonics - Which made for a double powered winner of a tune.

"Can't sleep a night -
A nightmare dem ah get
Get up over night and wash by cold sweat
All come outside-
Come sid dung pon step
Wid hand pon dem jaw, dem nah stop from fret"
Album: Many

Everyday. Etana has made some completely stunning music inside of her completely STUNNING career and while I wouldn't call 'Free' the finest (although it certainly isn't very far from it); she's probably yet to offer up a more pausing moment to date. Much like in the case of Luciano earlier, this tune is becomes IMMEDIATELY gripping to the listener and ultimately not only proves to be powerful in the manner in which it is carried out, but also powerful in being one of the best sang tunes Etana has ever sung - Which is OBVIOUSLY saying a great deal.

Getting Personal. Okay so, it'd surely be more appropriate that I bring this post with some type of story about how I lost someone close to me that this song reminds me of, but that's not the case. As I've said in the past, I just don't look at death like that and . . . Yeah. It's not necessarily a 'SAD' occurrence for me. HOWEVER! What 'Sleep With Angels' from Dancehall legend, Spragga Benz, does remind me of is an even more personal event. I was doing one of the three or four billion STUPID things that I've done in my life and this was a song which played the background to the moment. Eventually, with tears streaming down face, nose running and mouth watering - I stopped. I haven't heard the tune from then with tearing up just a bit and remembering my days of intense intelligence deficiencies (which, unfortunately, persist on a daily bases in only a slightly lessened version).

I've spoken extensively on this master class of a tune, definitely one of my favourite of all time and a tune which has had a great deal of impact on the way I listen to music and really, how I look at certain aspects of life, in general. What Ms. Malika Madremana managed to mature and maintain on the MASSIVE 'Just Jah' is this DIRECT connection from the spiritual world to the tangible one. I speak so often about people writing these kind of open ended songs which will either deal with one or the other (and that's not a bad thing, you'll likely find such a tune celebrated in this very post), but when someone can link the two well touched aspects of the music, that song becomes something truly special. Meet "truly special".

Hail The Emperor. And finally we have what should be the most obvious moment on the whole of this list as it's been a loooooooong time that I haven't become 'misty eyed' when listening to what should likely be regarded as the greatest praising tune in the entire of Reggae history (which is saying A LOT - probably placing it at the head of a MILLION songs, without exaggeration), 'Praise Ye Jah' from the incomparable Sizzla Kalonji. Similar to how well Ras Attitude captures what should be an incredible joy of returning to this magical place - "Home" - on this legendary track the main highlight is just how IMPORTANT the song takes the nature of its subject. If you are going to make a song speaking on the joys and the splendours of His Imperial Majesty, it should 'sound' (theoretically) like this! You don't even have to agree with the sentiment, but you can tell just how important this is to the artist. 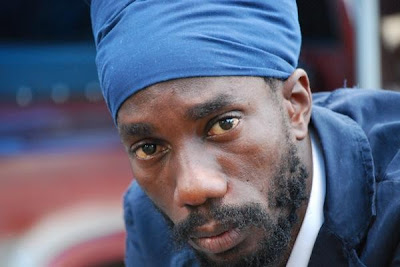 From a personal point of view, I'll always say that Sizzla's music changed my life and it was songs like this on the ignition. TEARS!