Blaze!: The Ten Best Ganja Tunes of The Era

In Reggae music there are several major or dominant topics under which our wonderful music usually comes 'packaged' in. The artists, the fans, the producers and TIME have made it so that these are the prevailing sentiments which are brought forth and discussed & detailed on a very consistent basis. Of them, you have songs about love and peace, about uplifting women (Mama in particular), about the slaying of oppressive society in babylon and others and about setting good examples for the youths. More still is any timely subject of the day (such as bleach, c. 2011). Historically and currently one of the most controversial of these topics and one of the most popular amongst artists and fans alike has been the GANJA SONG. A Roots Reggae album is rarely released without at least one "obligatory herbalist tune" and you probably can't name too many (if any) even remotely well known (or not so well known) name who hasn't made significant vibes on the subject. There are probably well over a hundred thousand (that's my guess, which means that it's almost certainly incorrect) Reggae songs about marijuana . . . But not all of them are good (most of them probably aren't). In order to narrow the pack down, here we take a look and listen to ten of the best since the turn of the century. Blaze!
{Note: Intentionally avoided mentioning any artist more than once}
{Note 2: Songs are ranked only according to my own individual thoughts}
{Note 3: This list was really really difficult}
{Note 4: No Soca} 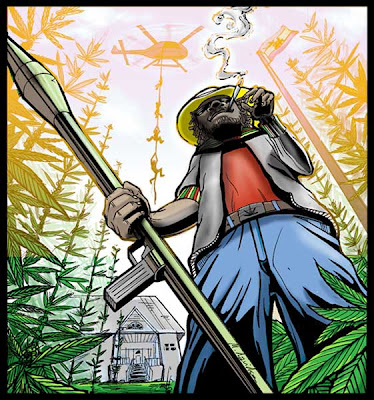