Jalena Has a Bad Reputation! 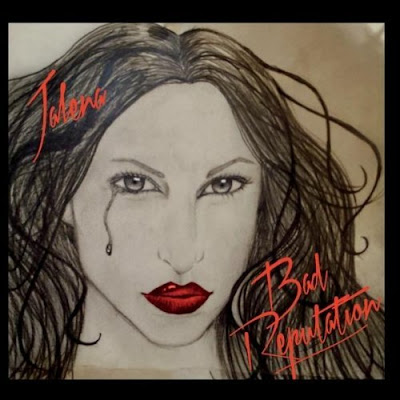 And apparently it's starting to really bother her! She was reportedly seen extremely pasty and pale, crying and absolutely inconsolable (although her lipstick was flawless at the time) (biggup Jessica Rabbit). But perhaps the fact that she has a brand new album can cheer up the otherwise generally and genuinely delightful Soca artist from out of Tortola who is stepping out of her (and our) comfort zone to do something a bit different on her newly minted third record, "Bad Reputation".

Jalena is mostly known for a very fresh and somewhat Poppish form of Groovy Soca and although she does blend in a few other things such as Reggae, R&B and even a little Zouk lately, to my knowledge she's never embarked upon a musical venture as experimental as what seems to be heard on the new album. It's pretty hard to describe, but the most obvious way to illustrate the vibes of "Bad Reputation" is probably to say what it isn't: It isn't Soca music. It's a little heavy Pop and a somewhat lithe (I hate that word) blend of Reggae as well. Interesting! Jalena is someone who has, at least presumably, had an ear and an eye pointed towards the more 'mainstream' side of music and with her base style being one so clearly accessible and appealing, it's not something completely outside of her grasp and, ostensibly, this album is a larger step in that direction. However, I don't think it's such a massive stride that it will alienate her more usual fans - like me.


Also, the fact that "Bad Reputation" even exists continues the singer's very nice run of having an album in three straight years. When we last checked in with Jalena she was pushing her 2011 set, the very colourful "In The Music" which followed up on the foundation laid back in 2010 with the still WONDERFUL debut album, "The Jam Sessions". So, as I've said in the past, if it is her intention to do one of these every year, and it seems as if it is, then going in any direction can't hurt at all because you know something new will pop up in about eleven months' time as Jalena loves showing her versatility and that's a great thing. Now in my mind Jalena is currently brushing up on French and Kreyol to give us a full Zouk release in 2013 (that's only in my mind though).

As for this project in particular, probably the tune which is going to get a great deal of attention is 'Gimme Ur Luv' which features Jalena alongside always impressive (and pretty underrated) Jamaican vocalist, Da'Ville. To my ears - that's a Zouk song and a pretty good one, as is 'He Said'. I also liked the bits I've heard of 'Gunshot', 'Me & You' (biggup Saïk) and a couple of others. The aforementioned 'Gimme Ur Luv' is the only tune I believe I heard before the album reached (maybe 'Me & You' as well), which is a first and another good quality - busting an album which is 90% new to you and getting to dig in.

And digging in is exactly what I'm recommending you to do here. Pick up the latest from Achis Reggae favourite, Jalena, "Bad Reputation" and hopefully cheer her up! The album just released (biggup Bredz) so you can find it slowly moving to your favourite etailer and, like both of her previous albums, you can get the physical CD at CDBaby.com. And biggup Jalena, she's always been very nice to us and I definitely look forward to that time of the year when she puts out her record and that time is now - So get excited!
Posted by Achis at 4:23 AM