'Treasure': A review of "Freedom Fighters" by Chezidek 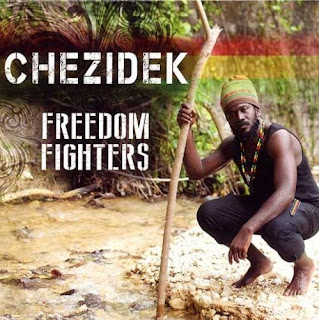 This album follow more closely to the "Truly" release in my opinion. Ras Attitude's album was a bit freer and, even as an artist in general, he has a looser approach and a more versatile style than does Lutan Fyah (check his contribution to 'Lost' from "Over The Top", the new album from Perfect Giddimani) who does his best when he goes straight ahead and this album is more along that vibe as well (and Chezidek can really do just about anything with that unusual voice). Also like that album, this set is a very strong lyrical piece and with a consistently impressive musical backing, I think everyone fortunate enough to hear it will be very impressed. The impression of Chezidek's new album, "Freedom Fighters", starts with its title track which is one of the finest songs on the album definitely. This song is a call to action in the purest sense of the word. Chezidek is saying that a lot of people charged with standing up against oppression and oppressive society have gotten 'soft' and need a bit of a kick in the proper piece of anatomy to right themselves. Of course he's also saying that the ranks of 'Freedom Fighters', in general, need to swell anyway, so he's really just looking for a few upful and positive and brave people on this big song ["Buzzrock warrior. Jah Jah soldier - Let dem know you are not no pushover"]. Next is the moving anti-violence set, 'Eye Watas and Prayers [Live By the Gun]'. The song is another very strong one which takes a unique look at violence in examining the ultimate end-result of it and how no matter how bad you may be, if you engage in that type of behaviour, sadness can and usually WILL find you. The tune which wraps up the first batch, 'Chemical Free' is absolutely one of my personal favourites on the whole of "Freedom Fighters".

Forward for the roots for sure
Chemical-induced, wi no waan no more
Chlorine water, wi no drink no more
Genetically modified food no more
The lamb food don't give to the poor
The bad food lef it inna di store
CANCER FOOD DON'T CARRY NO CURE
DIABETES FOOD A DESTRUCTION DOOR!"

The beautiful and environmentally conscious piece is a dazzling one and really showcases the singer in a very strong light. Definitely don't miss it.

Though the second portion of the "Freedom Fighters" is quite stirring, the first is brimming with sterling material. Figuratively speaking none shine brighter than the familiarly vibed 'Shine Your Light'. This song actually features the same track which backs Lutan Fyah's towerful (biggup Prezident Brown) 'Selassie I No Partial', the best song from his "Truly" album. Chezidek also gives the riddim a very powerful rinsing to the tune of another humbling praising track and one of the better selections you'll find present here. Also check 'Burn Out' which is supported by the same composition which took on the Fyah's 'Rasta Is My Purpose'. This is a very interesting piece as far as its direction. What I took from it is that it is ultimately a song about growing up and maturing. What the singer seems to be saying is that everyone reaches a point in life, whether fourteen or forty, that they have to choose a positive way or a negative one and he's hoping most of us choose the former over the latter. It is a nearly special piece to my ears and, I hate to keep saying, but a major attraction here. There is the inspirational offering, 'Never Give Up', which is pretty much what you would expect, but I do like the subtle edge on this one. There is a bit of spice here (Chezidek sounds a little pissed off at times, which is a good thing) on an otherwise delightful song which is a damn captivating set of qualities to possess on a single tune. Speaking of edges, the single greatest one on "Freedom Fighters", at least to my ears, comes on what is also my choice as the album's biggest winner, the scintillating 'Dem A Dweet'.

Dem will bun out di most badmind
Mi check it out and dem ah host badmind
Mi neva trust dem from longtime -
For mi know mankind is so unkind
Exploding like a landmine
Forcing up now pon di frontline!
And dem have di lowest punchline!
DEM ONLY COME HERE FOR DI LUNCHTIME!
Seh dem love - dem only love sometime!
Tell dem seh good and evilous caan combine!
I wonder if dem si di sign
Wonder if dem si di sign
Better get some love inside!
Better get some love inside!

BOOM! On the song Chezidek takes aim at some of his peers who may not be living up to the 'character' they present in their music and people in general who know right and speak right but still prefer to do wrong, intentionally.

The bridge which takes us from its first half to the second half of "Freedom Fighters" is a good one called 'Good Girl'. This is the love song on the album and though such a tune is by no means a specialty of Chezidek's (though you should know 'In My Heart'), this is a nice effort on this one and a very sonically pleasing piece as well. Later on, after taking care of the love song, Chezidek also takes care of the rest of his obligations. Most Reggae albums have love songs, they have ganja songs and they have songs to Mama and he covers the final two in succession here with 'Light Up Your Spliff' and the appropriately, but not exorbitantly, titled 'Mama' [WHAT!]. The first is nearly special as Chezidek echoes the great Everton Blender ["Light up your spliff and hold it up high!"] in speaking about "brainfood". I really did enjoy this song so much and partly because of its very simple sound which actually seems to raise Chezidek's vocals at times. He is a singer and a fine one, but because his voice is so unique, you rarely get to hear it pushed to its limit and though he probably doesn't do it here either, he does strain it harder at times which is remarkable to hear. As for 'Mama', it too features a fine vocal performance and one befitting the most wonderful person in the world and all of her virtues. And speaking of obligations on Reggae albums, "Freedom Fighters" also features a gold bar of a closer in a song called… 'Thanks & Praises'. You may very well have heard a hundred songs with the same title and sentiment, but this is another GOOD one to add to that lot with its HEAVY and intoxicating sound.

The latter portions of the album, as I said, do feature some prime level material including one piece in 'Mr. President', which took a minute to grow on me, but certainly did at some point. The tune actually features, like 'Dem A Dweet', some of Chezidek's skill as a DJ. Like Ras Attitude's singing, this is something I do hope that he'll do more of in the future, because he does have a talent there as well.

Also really solid to my opinion is the track which follows, 'Jah Jah Tabernacle'. This song sounds like something directly from the "Judgement Time" record with its lush sounds. Its subject too, which is obvious, would have placed it finely on that album and it stands in high esteem here as well. 'Fire Must Haffi Bun' is somewhat broad, but primarily deals with the Afrikan Diaspora and, as I've said in the past, I just love songs like this which can kind of entertain and educate simultaneously and this is no exception as the sound here is very strong as well. And also check the very clever 'Head Get Swell' which examines people who gain success and then leave their humble mind and ways and begin to get turned by arrogance and such things. Such a situation, most unfortunately, is entirely too common, even on ridiculously small scales, but outside of the typical 'stay humble' refrain, you don't too often see it looked at in songs and I think that it is a fine addition, from a subject standpoint, to this album. 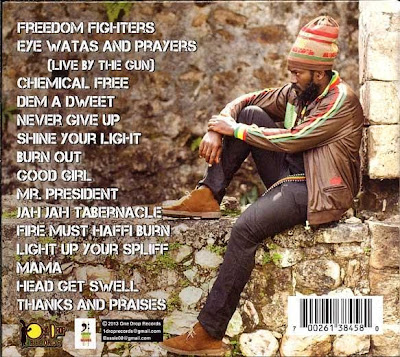 Overall, I will put this one in context for you: Though I would rate, clearly, three albums ahead of it -- the aforementioned "Judgement Time" and "The Order of Melchezedik", as well as his debut, "Harvest Time" -- that's it. The rest are at least debatable and in my opinion "Freedom Fighters", in a different way, is just as good as "Inna Di Road". Though it may lack the spectacular spots that album had (which included songs like the title track, 'Leave The Trees' and, of course, 'Call Pon Dem', some of the biggest hits of his career), it makes up for it by virtue of being consistently solid and occasionally more. Also, as I mentioned, it is such a FULL album due to its length, though I wish there would have been a combination or two, it doesn't leave much to be desired and is a very well-rounded set ultimately as well. So, while One Drop Records may not be in a hurry to make people aware of it, and that's fine, what they've now managed to string together again  in "Freedom Fighters" is a fine album which is sure to find an audience amongst the most passionate of fans - who are just as certain to be the only ones who know that it does actually exist. Another big winner from Chezidek and One Drop Records strikes again.