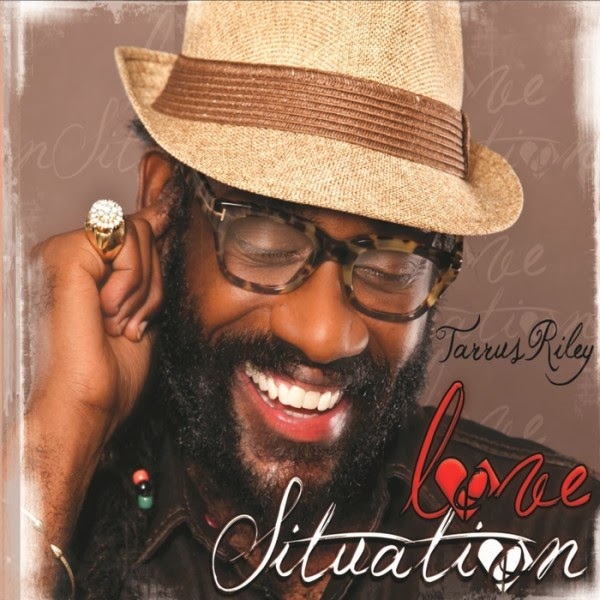 
BIG, BIG, BIG things are at the head this week as Reggae superstar, Tarrus Riley is set to return with his brand new and fifth (and a half) studio album to date, the throwback saturated "Love Situation". Perhaps somewhat similar to the unforgettable display put on by Busy Signal a couple of years back, on the magical "Reggae Music Again", Riley also turns back the hands of time to produce what many are already hailing as a classic ahead of its release date. Unsurprisingly, on board this time, as always, is the venerable Dean Fraser, as well as the same Shane Brown who produced Busy's aforementioned opus as well as a hundred different labels, including the wonderful people at Zojak Worldwide. It doesn't particularly matter who is the offering early this year, this is THE big Reggae album of the year thus far and you can surely expect a full review in a few days. 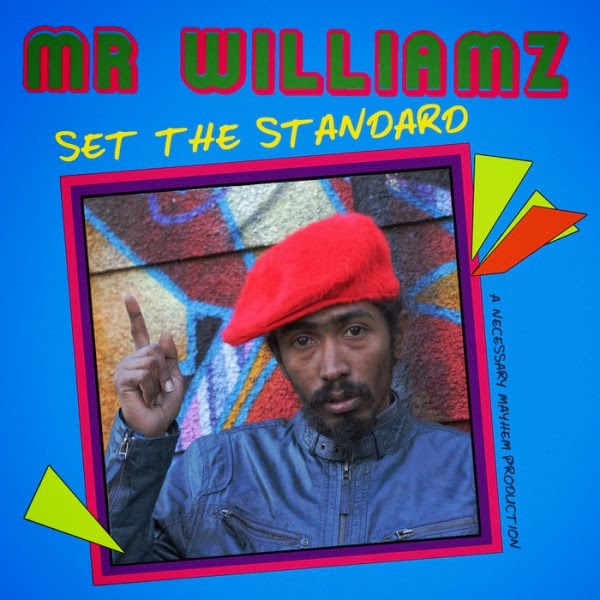 
Also turning back time, and doing it on the same day and with an album we've been waiting on for a loooooooong time is UK firebrand, Mr. Williamz who FINALLY is set to deliver his debut album, "Set The Standard" for Necessary Mayhem. Everything about this album, from its sound, straight to its cover is old school Dancehall which has been something which has definitely made Williamz unique and, because of that, I'm expecting something special from the DJ. NM has been responsible for many of Williamz' biggest moments to date (some appear on this album) and that only adds fuel to my anticipation for what should be an excellent display of skill and an intoxicatingly authentic Dancehall release. 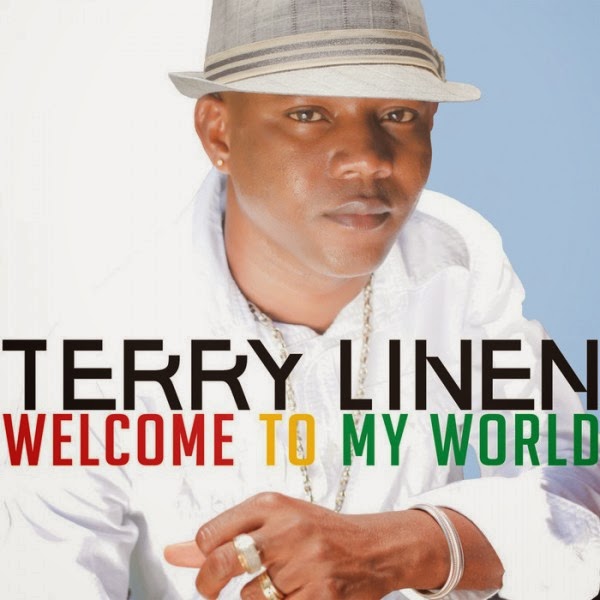 "Welcome To My World" by Terry Linen [VP Records]


Veteran vocalist Terry Linen is also back at work with the forthcoming release of a brand new album (which I think is his third), "Welcome To My World". The album not only finds the singer re-linking with VP Records who did his self-titled debut set more than a dozen years back, but he does so with the wonderful Joe Fraser Records in production. As is his penchant, Linen returns with an album which features at least one cover, 'Bam Bam', and a full exhibition of one of the better voices in Reggae music over the past couple of decades or so. Kiprich guests. 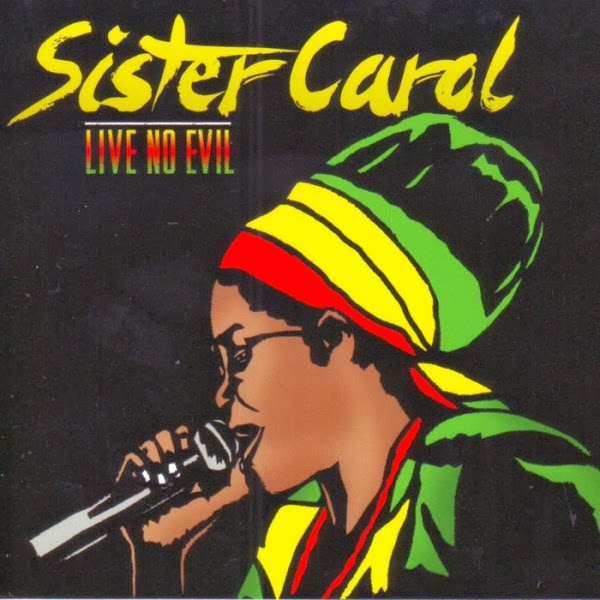 
The well esteemed Sister Carol also has a new project in the offering which is his first since… her last one, "Live No Evil". Sister Carol is one of those people who it is simply impossible to underrate. She quietly has such a passionate and loyal fan base as many of her fans, in 2014, have literally grown up listening to her works so I'm expecting this album to be quite popular. And if you haven't been someone who has appreciated Sister Carol through the years, what I usually say about her is that she's one of the people who has based her successes on her COMMON SENSE. Her music is very uplifting and educational and, again, this should be a really solid release. Pick up "Live No Evil" and see for yourself. 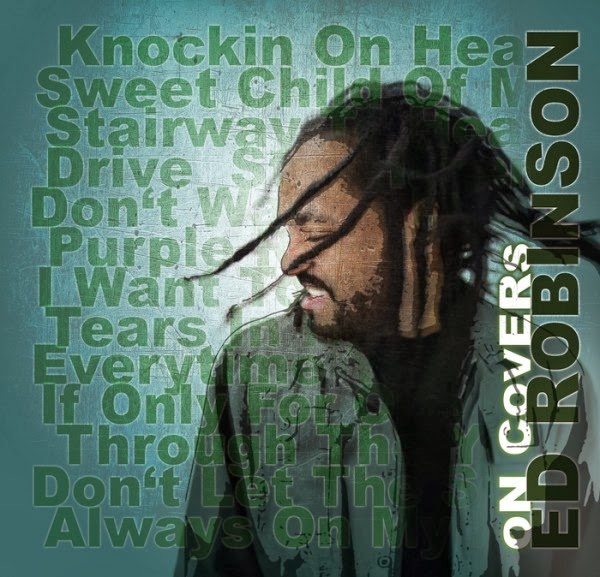 
And because there is no limit on how many veterans we can have in a single post, also be sure to check "On Covers", the new album from singer, Ed Robinson. We last heard from Robinson just a couple of years back on the well received "Written In Stone" (that album seems like it a lot older than 2012), so I was somewhat surprised to see him back already so early in this new year. Of course that doesn't mean that I'm complaining and I'm sure he'll put a shine on some of these remakes which're brighter than their originators. 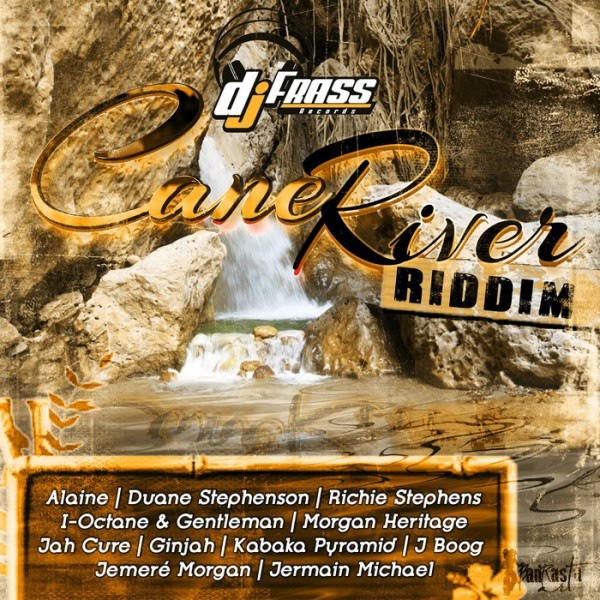 
Frass and company continue their winning ways with their latest composition, the wonderfully titled Cane River Riddim. Even better than the title is the actual track which seems to come in with a slight R&B/Jazz tinge radiating throughout this lovely creation. Better still, perhaps, is the roster of vocalists brought together to voice the Cane River. It is an Alaine type of set of the songbird ["when I hear the songbirds I think of you"] [WHAT!] [BOOM!] gives the Cane River arguably its biggest moment with her 'So In Love'. Also appearing are the likes of Morgan Heritage, Jah Cure, Kabaka Pyramid, J-Boog, a heavy combination featuring I-Octane and Gentleman and others. An amazing lineup and fitting for such a track. Don't miss this one. 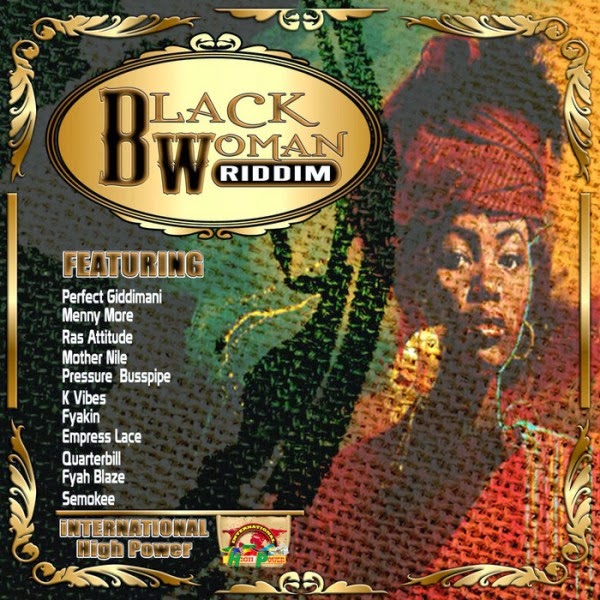 
I was certain that we had already dealt with the Black Woman Riddim from International Highpower, but… Bredz told me we didn't and I'm entirely too lazy to look it up for myself so here we go. Here we have another EXCELLENT piece with a highly impressive collection of artists making for, hopefully, what may go on to be one of the better riddim albums of 2014 with this kind of talent (like the one I just mentioned). Appearing here is a stellar group of VI artists, in particular, including Pressure Busspipe, Ras Attitude [twice] and Mada Nile, as well as the likes of Menny More, Fyakin (whose 'Caan Stop We', is sublime) and Perfect Giddimani (who also has a new album coming early this new year). 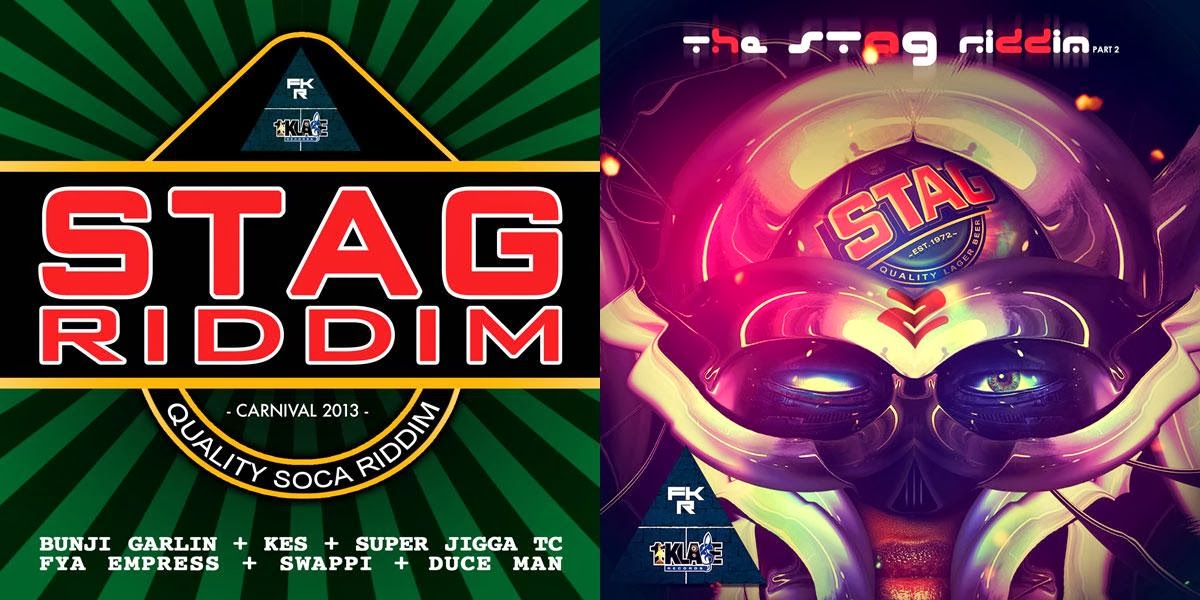 
Biggup the people at Fox Fuse who is constantly putting their hands to good use as, early this year following dealing with Norris Man's solid latest piece, "Mystical Journey", in December, they're back at work. They do a great deal with Soca music and here we have the official release of the Stag Riddim from 1st Klase Records. I believe this track goes back a couple of years because I definitely recognized 'Touchless' and 'Bring It To Meh' from Bunji Garlin and Kes, respectively and the always welcomed Fyah Empress and Super Jigga TC also have tunes here.

HOWEVER, Fox Fuse and 1st Klase have also a sequel to the Stag (called… the Stag Riddim Part 2!!!) and it features five tunes completely new to my ears. Garlin also voices the sequel and is joined by Lyrikal, Swappi and others.

Releases on February 11 [BOTH]
Digital 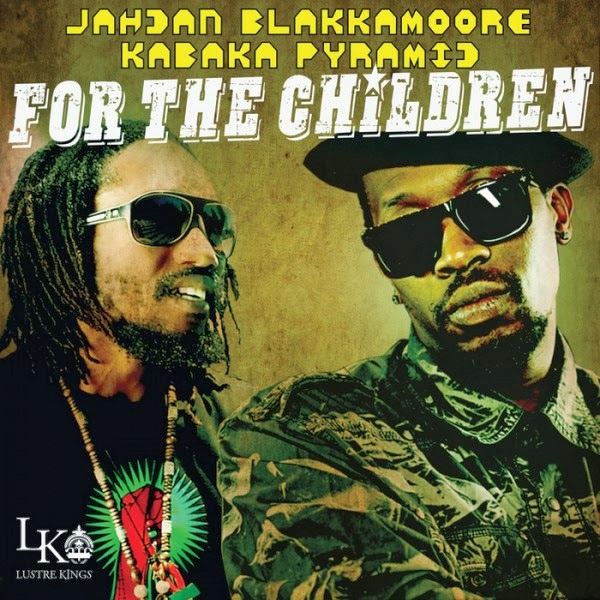 
Something I'm really looking forward to is in next as 'For The Children' is a tune not only marking a forthcoming big year from a pair of vocalists, but for a label as well. The tune which features almost TOO MUCH talent in linking Jahdan Blakkamoore with Kabaka Pyramid comes via the US based Lustre Kings Productions, the 'Kings' in the always active Zion I Kings, who haven't been terribly active lately to my knowledge and with big years already planned for their partners in I Grade Records (potential albums from Midnite, Pressure and Lutan Fyah) [WHAT!] and Zion High Productions (the Jah Warriah Riddim and maybe an album Ziggi Recado [DAMN!], hopefully LKP can join in fully as well. 'For The Children' is certainly a big start and the release for the new single features a dubbed out version of it as well as a remix. 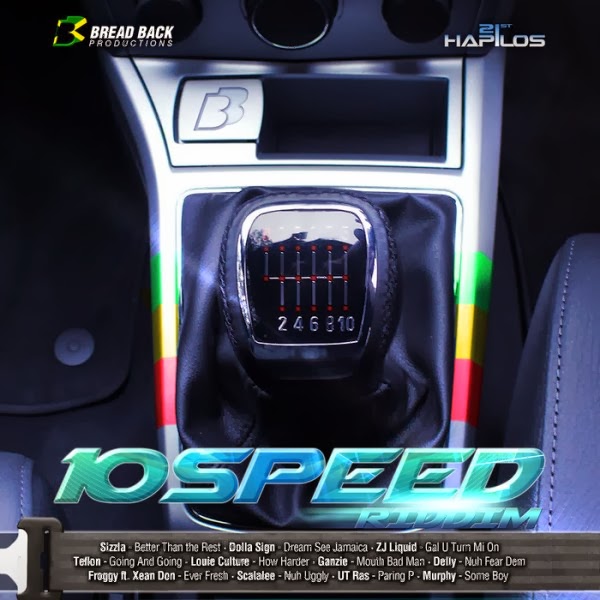 
Now we're taking a ride with Breadback Productions who wants you to check out their latest track, the 10 Speed Riddim. This one is very interesting because if you just listen to the actual riddim (and Breadback is nice enough to include a clean version of it), it's fantastic. It's a KNOCKING piece of modern Dancehall which definitely caught my attention when I first heard it and it's now set for its official release. As is the case with almost everything Breadback does, the 10 Speed features a tune from Sizzla Kalonji, but something which well got my attention was a song I'd never heard, 'Paring P', from the woefully overlooked UT Ras. Veterans Terry Ganzie, Louie Culture and Delly Ranx also have selections on the 10 Speed. 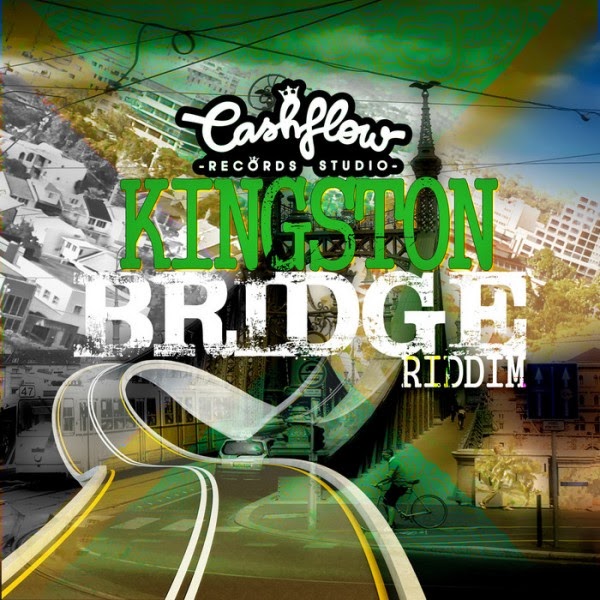 
And finally (this was very, VERY easy to write today) check out the full release of the colourful and heavy Kingston Bridge Riddim from Cashflow Records which jumped up in the second half of 2013. While the group of names voicing this one may not be as immediately impressive as a couple of the other tracks we featured here today, the Kingston Bridge Riddim is MAMMOTH and they have put together a very nice group of their own as well. The first tune here which came to prominence, to my knowledge, was 'Nuh Joke' from Laden which was aimed at Khago (so much so that whoever put together the digital version of the Kingston Bridge was sure to include 'Khago Dis' in the tail of the song's title) in the midst of that madness between the two, but Laden isn't standing alone and is joined by Kiprich & Alozade, New Kidz, Erup and even Sizzla Kalonji. But the biggest winner here is the track which is an ANGRY joy to listen to.

Releases on February 11
Digital
Posted by Achis at 11:16 PM