Completely Random Thoughts: "It's These Kind of Things to be Careful With" 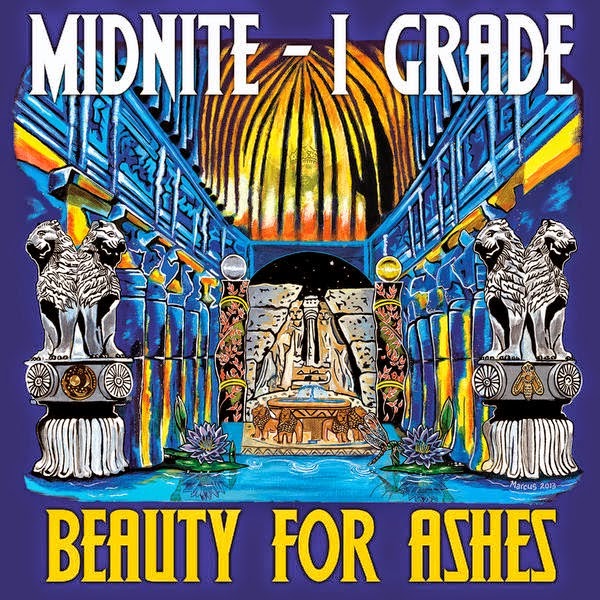 Okay, it's August, worst month of the year, by far, but it is a new month and at or near the beginning of each new month we do a feature called "What I'm Listening To" which is… kind of self-explanatory. And this month is no different, we'll get to eventually, but when I started to write it I ended up going on and on about the main thing which has been anchoring my listening attentions these days, "Beauty For Ashes", the [SHOCKINGLY] still most recent release from Midnite, along with I Grade Records and the Zion I Kings. On the surface, I loved the album from the first time that I heard it and I also figured that it, like most of the good material from Midnite that I've heard, inherently (I don't even know if Vaughn Benjamin writes for the moment. Virtually ALL of his music seems to come with a kind of timed-delayed appreciation value, even when it is good immediately) it would improve as time went by. Now, nearly six months on from its release date, I hear vibes and I hear colours that I, again as someone who thoroughly enjoyed the album initially, didn't hear previously.

The biggest example of this, coincidentally, comes via the album's most recent single, the increasingly spectacular 'Same Boat We'. I'd went through this tune dozens and dozens of times and the recent clip certainly gave me yet another welcome boost to go back into it and… damn I don't remember this tune sounding this good.

It's these kind of things to be careful with
Rasta seen countenance fall and broken spirit
Just uplift out of it how Jah create and insist
And the legislative whip was the laws of uplift
Whip is governmental title inna politics
Whip was also inna slavery ah perform wickedness
Dem psychology trigger nerve and how dem touch it
Personal responsibility to each human unit of livity
That mean every simple one inna I-manity
Simple respect make a people in prosperity
The ebb and the flow, the give and take of living, moving currency
KING SELASSIE I SPEAK OUT AGAINST ISOLATIONIST POLICY
Human sovereignty where people still retain their dignity
And play a part inna how things run inna fi dem community
Situation where none can shut out loyalty
Gonna do the best they can to enhance the country
And some of them will face the sun -
Some of them with tenacity
There's a fusing of cultural diversity"


So easy and so effortless, the track is an absolute masterpiece of both music and writing. On the sonic side, you have to really get into this subtly TRAVELING riddim behind the tune. It pulses, it crawls and it, alone, is an amazing vibe. On top of it, however, Benjamin delivers what is, in my opinion, one of his mightiest lyrical efforts in recent times and even in the short-term, that is a very significant claim but one which is more than appropriate in my opinion. And it is also a strong point of illustration as to how Benjamin's writing can be so effective when at his best. Of course, on other levels, people like me like to throw around terms like "cryptic", "mysterious" and "obscure" to describe his style, but 'Same Boat We', though clearly open to interpretation (as are all things) was none of those things. The composition is one about not actually bringing people closer together, but acknowledging that we are already close together and, in the grand sense, what is bad for one is bad for everyone. I also looked at the song and have since related it to another favourite of mine from "Beauty For Ashes" and the album's closer, 'A Healing' ["kind words and good emanation frequency"]. That song is different because it is more about making that effort to bring people together, but they both deal with observing the path of your fellow human being and at least acknowledging their plights and their passions ["kind words and good emanation frequency"] [… or did I say that already???] [WHAT!] [BOOM!].
Other songs have also gotten a bit of new illumination for me (most notably the title track and the giant piece of diamond which underpins it). But you know we're not finished with this one -- we're not even close -- and we'll tell you about that next time. Until then, obviously if you have not, do please check out the "Beauty For Ashes" by Midnite.
Posted by Achis at 6:11 PM