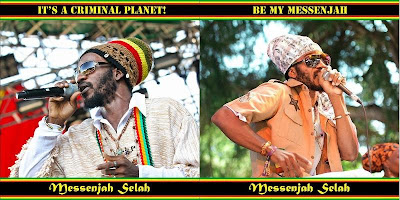 Okay so, today we were supposed to be doing a post of a pretty interesting (in my opinion) list, but I . . . just didn't do it (and will likely be starting it after this). Anyway, you'll get that tomorrow or whatever the next day is, but today I want to mention a favourite of ours who is, seemingly, in the midst of absolutely FLAMING because quietly, Messenjah Selah has been on a musical roll.
The last time we mentioned his name, it was for 'Wanna Get Away', his excellent effort for the Stringz Riddim and earlier this year, Selah has remained active and consistent with tracks on the Alive, Step By Step and Street Hustle Riddims, respectively. He's also pushed several other tunes and really done everything you would've hoped and HOPEFULLY in 2012 he gives us another album.

While we wait, however, Messenjah Selah has dropped a MIGHTY pair of tunes from another Achis Reggae favourite, Blaak Lung, and his Greensphere Records imprint - 'Criminal Planet' & 'Be My Messenjah'.

Both tunes are, essentially, social commentaries with 'Criminal Planet' definitely being the more 'conventional' of the two although not FULLY straight ahead, with some very adroit historical references.
"It is the layer on the top
That is always where the buck stop
And it's the labours of you and me
That make commercial goods flow free
When controls are set by man
When no exploitation is forbidden
Makes living on earth impossible then -
That becomes criminal!

Back through time it's always been so
From Julius Caesar to the Alamo
The soldier's sword defeats the farmer's hope
From the Vatican smoke to the USO!
We hear the Romans, the Mongols, the Vikings and the Huns-
Find it easier to send their sons
Murdering across the world in search of plunder!

" . . . A young man who was the child's Dad leans against a rusty shack
He searches for what he once had, but can't seem to get it back
'The country is broken', he says
'There are no jobs!'
'The people are frustrated, they're turning into angry mobs'
So I gave him some juice out of my cart
'There's not much I can do', I said, 'Except to keep you in my heart'
He asked me -

Do you wanna be my messenjah?
Will you spread the word?
Can you make my story heard?
I don't want to go bad and pick up the ways of the gun
I just want some honest work to make a living beneath the sun

I will be your messenjah!
I told him this
I will be your messenjah!"
This song, if for no other reason than its punchline and title - I can well see becoming some sort of signature track for Selah. It's the more melodic of the two and at times, completely stunning (the final verse, which I refuse to spoil for you, is just brilliance and in a twisting type of way as Selah turns the tables on the listener!). The music on both tracks is outstanding and features the work of another favourite of ours, the incomparable, Tuff Lion. So check out 'Criminal Planet' & 'Be My Messenjah' by Messenjah Selah - Both big tunes are currently available in digital stores. 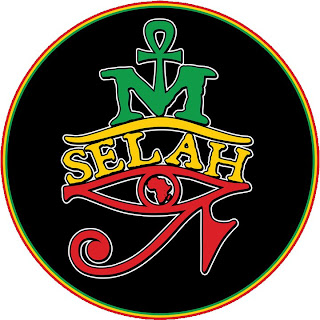